Should we pay more attention to James I before he became King of England? 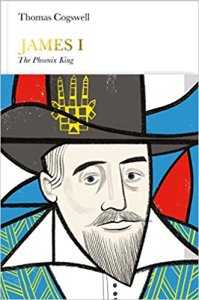 Studying or teaching Shakespeare’s plays, the figure of Elizabeth looms in the background, like the spectre at the feast.

We see it in the ever-present censorship, in the light of the Treasons Acts in 1571 and 1581, outlawing public discussion of the succession.  Or, more positively, in the ‘Gloriana’ cult that produced works like Spenser‘s The Faerie Queen, and flattering nods to Elizabeth wherever you look – like links between her and Theseus in A Midsummer Night’s Dream.  We see it in her discomfort with comparisons to Richard II, and the propagandic lionization of Henry VII.

Reading Cogswell‘s short, sympathetic biography has made me reassess the extent to which we / I ignore James until the succession question becomes absolutely critical.