I shall despair; there is no creature loves me,

No matter how many times I watch it – with Y9, 12 and 13 classes, or alone – Benedict Cumberbatch can move me to tears, delivering what I think are the saddest lines in Shakespeare.

The saddest lines … by arguably the biggest villain?

END_OF_DOCUMENT_TOKEN_TO_BE_REPLACED

‘Does he think he’s effing Mr Tickle?’, I scribbled feverishly in the dark …

Part One: a six-period day (out of a maximum of six); full of allergies, and C5 full of pupils I sometimes I wonder if I am allergic to; then the first half of this, in my classroom, accompanied by some of my lovely sixth-formers.  By the way:  if you didn’t come along, that doesn’t mean you’re unlovely – it means I missed having you along for the ride.

We had fun.  And you can too, if you come on Monday to see the final half …

Nowadays, I look on Shakespeare performances as ‘cover versions‘ of classic songs. Before we discuss this one, I need to talk about two things:

END_OF_DOCUMENT_TOKEN_TO_BE_REPLACED

This has been on my mind for a while … 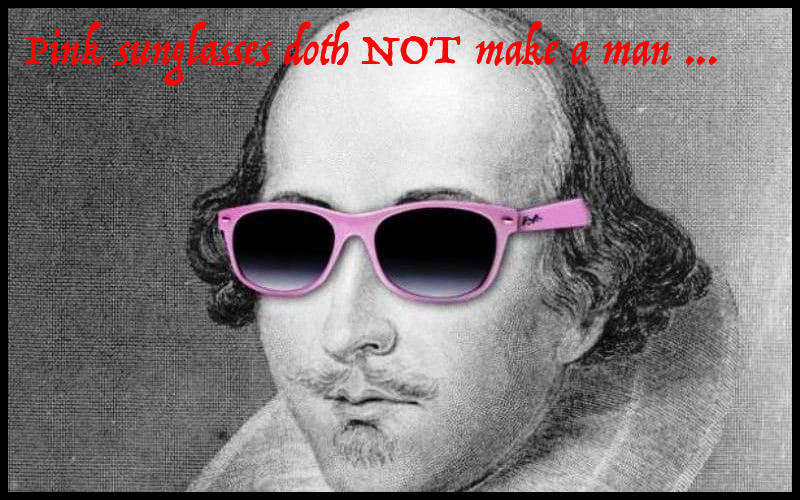 This is a long read – I say that on a blog where posts often hit 1,300 words, against ‘accepted wisdom’ – so apologies in advance.  YOUR blog is your blog; my blog is MY blog, and I write for catharsis and as a kind of journal, not ‘popularity’, ‘followers’, or ‘influence’.  I was tempted to temper my words with a gallery of pictures, but that didn’t feel right, either.  This post feels a little more personal than most.

In spite of, or maybe because of, constant trawling for Shakespeare-related content, I have only just found this.  Last April, Peter Marks wrote a piece for The Washington Post  (link below) suggesting that Americans are too ‘intellectually lazy’ to appreciate Shakespeare, and fearing for the future popularity of the plays.  My immediate response was ‘you think it’s bad in the US?  Try over here, where Shakespeare was born!’

END_OF_DOCUMENT_TOKEN_TO_BE_REPLACED

Soon there won’t be much room for customers at The Boar’s Head.

… although it still isn’t keeping pace with my book buying.  Buying books and reading books operate in entirely different dimensions, as my overflowing bookshelves will tell you.  When I hit 100 books, which isn’t far off, if you include the Arden Third editions of the plays themselves, I may have to employ an orangutan to take the bookshelf into L-space.  (GNU  Sir Terry Pratchett)

END_OF_DOCUMENT_TOKEN_TO_BE_REPLACED

Richard has been a part of my life, a surprisingly large part, for about six years or so.  In fact, we might call him part of the ‘soundtrack of my life’, since I turned 40.  So whilst I try and inevitably fail to do the play justice in these posts, one of the things that’s already settled is the Shakespeare’s Jukebox ‘Soundtrack Album’ that I publish at the end of my amble through the play.  Some songs have been ringfenced, so that I don’t use them for any other play … this is one.

If there’s a decidedly ‘camp’ flavour to the jukebox, in fact to these posts (I mean:  Mercury, Hasselhoff and now EJ?), it could be down to two factors:

I’ve often described it as a pantomime for grown-ups.  Ironically, because a child’s pantomime is possibly the worst way I can think of spending an evening. Perhaps this takes on board the criticisms of those who favour other, more mature or ‘intellectual’ plays.  Richard is gleefully childish and petulant, at least until he becomes king, and there are several times where I want to shout:

or similar, at members of the cast:  Clarence, Hastings, the young Duke of York, the hapless Burghers of London, at the very least.

But … having ambled through the HVI plays for the first time this year, I have a completely different understanding of and respect for this play.  The Bitch is back in Act I scene iii, and there can be only one Bitch (capitalisation intended), as we saw in The Hollow Crown …

END_OF_DOCUMENT_TOKEN_TO_BE_REPLACED

Larger than life.  One of a kind.  Brash on the outside, to mask an inner vulnerability.  The ultimate showman, whose memory lives on long after his death.  Freddie Mercury is all these things, too …

I’ve arrived at Richard III, the first play in my read-through that I know well, with a sense of awe, almost a fear of not doing him justice.  Unusually, I’m as tentative as I might have been had I met him with a pathetic autograph book in my hand (or Mercury, whose death in 1991 touched me as few other celebrity deaths have:  Prince and Sir Terry Pratchett are the only others that I register, emotionally).  My relationship with Richard grows more obsessive and complex every time I teach him, and my recent book-buying seems unconciously centred round the historical Richard and the major players in his accession and downfall.  I’ve also realised there is no way I can do this in the usual 1,000-ish-words-per-act format, so all I’m going to do is try to avoid 1,000 words-per-scene, if I can.

How has Shakespeare done this to me?

END_OF_DOCUMENT_TOKEN_TO_BE_REPLACED 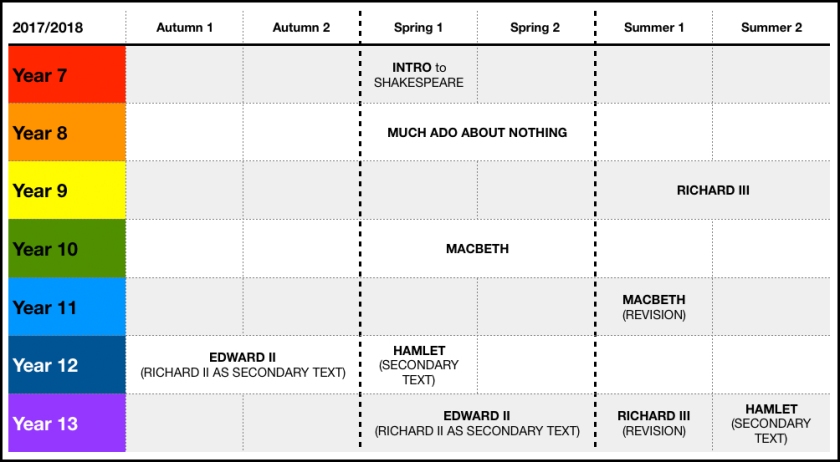 … nor custom stale his infinite variety.  (Enobarbus:  ANTHONY AND CLEOPATRA:  II.ii.245-246) [bastardised by me, obviously]

Our timetables for next year were finalised last Friday, and this is what mine looks like – at least in terms of Shakespeare / EMP material.  It’s more of the same, basically – although I finally lost The Tempest – which Top Set Y11 had voted to study back in the day when I had complete freedom about what to teach.  I think it could be the last year I teach this combination – I want to make at least one change …