A cheeky way of muscling in some commentary on one of my favourite plays, way ahead of SCHEDULE?  Perhaps.  I shouldn’t be discussing Julius Caesar (let alone Star Trek) until September 2018 …

Arden glosses the Lupercal as – amongst other things – a cave where Romulus and Remus were nursed by their ‘wolf-mother’, as well as a rural deity.  With the suggestive etymological links to ‘lupus’, I wonder to what extent the feast was an appeasement of the predators that shepherds had to contend with.  Certainly, I think there are echoes of this in the washing off of blood (by wool dipped in milk) in this account.

It’s the triumph of the flock over the predator.  Thus, it’s inextricably linked to ideas of celebrating fertility and fecundity.  Equally, it glorifies the sacrifice of the one in order to save the many.  I always thought that there was something Shakespearean about Spock:  not least his actions in The Wrath of Khan.  ‘The needs of the many’ indeed.

Oops!  ‘To say nothing of the basis of our Christian religions’, I suppose I should have said when discussing ‘sacrifice’.  If my executors post next week to say that I have been struck by lightning, you know why …

Fascinatingly, Leonard Schmitz (see last link, and ignore the Leonard coincidence, if you can) also draws some conclusions about the feast’s role in the naming of the month February.

Does any of this have to do with Shakespeare?  Of course!

Julius Caesar opens on the ‘feast of Lupercal’.  Murellus, sent on a suicide mission towards the Capitol by his ‘friend’ Flavius (more on this betrayal at the appropriate juncture) tells us so (I.i.68).  Then we see Caesar en route to the festivities.  Cue a typically Shakespearean – or indeed, simply male – assumption.  Caesar instructs Antony, acting as one of the Luperci:

‘Forget not in your speed, Antonio,

To touch Calphurnia; for our elders say,

The barren touched in this holy chase

No wonder he is so impatient for her as the scene opens.  It’s a significant moment.  A main thrust of Cassius’ argument is that Julius is of a ‘feeble temper’; his inability to reproduce, and the implied possibility of his infertility, lend strongly to this viewpoint  (I.ii.129).  It would be bad enough, to EMP audiences, that he could not produce male heirs – think Henry VIII – but to produce no heirs at all would be simply unacceptable.  I mean, how worked up did Macbeth get about it?  It is, though (as I said earlier), a very male assumption that the problem must lie with the woman, of course. And Lady Macbeth did ask to be unsexed, almost as if to confirm this …

For Julius, it’s too little, too late.  He has just one month to live. 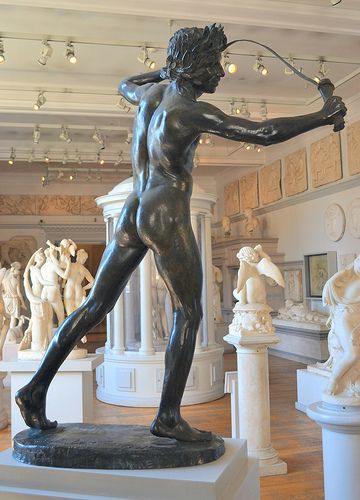 Finally, if you’re in the UK, you could do worse than visit the Walker Art Gallery in Liverpool.  This fantastic statue by Conrad Dressler captivated me, and brought the Lupercal to life.

Did I say finally?  We seem to have a habit of conflating our festivals to widen their appeal.  I’m with Schmitz in resisting the convenient proximity with St. Valentine’s Day …

As well as the sources linked above, quotations from the play are referenced to: Daniell, David (ed., Third Edition), William Shakespeare:  Julius Caesar, (London:  A & C Black, 1998)

One thought on “The needs of the many …”