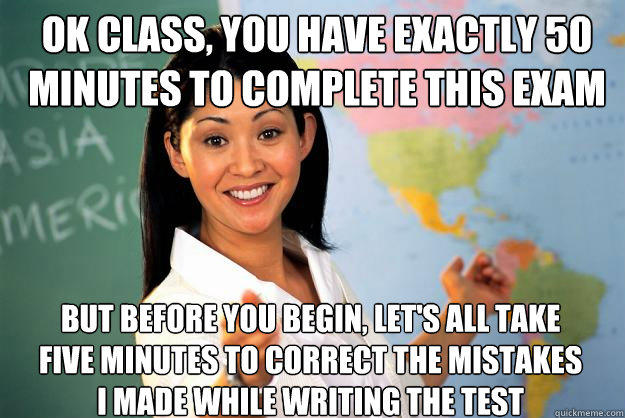 or simply Much Ado About Nothing … ?

students were in tears after the exam

A multiple choice question for the adults.  Or for my students, who sat their Shakespeare exam on Monday just gone.  You sit an exam where you have a choice of two questions.  One question appears to make no sense. Do you:

a) attempt the other question;

b) burst into tears;

c) get onto ‘anti-social’ media immediately afterwards to express your eternal disgust; and/or

c) tell the world that if you fail, it’s not your fault

If you haven’t seen today, there has been uproar about a mistake on the OCR-board GCSE Literature paper.  Check this little beauty out …

I particularly enjoyed BBC’s coverage of this incident, given their recent performance on the same play, which led to my original Crimes Against Shakespeare post …

Still, another part of me asked just how bad the whole thing was.

Brighton College headteacher Richard Cairns, headmaster of Brighton College said it is “hugely important” that OCR reassure pupils immediately that they will not be disadvantaged.

“It beggars belief that these things are not checked properly,” he said.

The question is one of two that students could choose to answer as part of the paper.

At which stage, my mind began to whirr.  The AQA specification does not offer a choice of question on Shakespeare.  Which led to a ‘not being funny, but‘ thought:  if you have a choice of questions, and one looks difficult, then simply answer the other one.  Or am I over-simplifying the matter?

I’m going to suggest – perhaps controversially – that in a high-pressure situation, with people who are mostly under-prepared (through their own choice) there will be a section of the students (and indeed their families) who will be looking for a scapegoat for their own procrastination and/or laziness.  Many of my students have written extra answers for me to mark.  Or given up time, during or after school, to go over the things they don’t understand for whatever reason.  It’s a two-year course, and if it was achievable in a frantic two-week ‘revision window’, teachers would only be paid for those two weeks, you can be sure of that.  The way I see it, and have said it several times to classes: “You’ve had this text for well over a year – you knew a closed book exam was coming.  What did YOU do about studying the play?” Plus, you had a choice of questions, which is more than the AQA exam board offered my students …

My students would say that I am a notoriously harsh marker.  It’s true.  You EARN your grade with me.  And, I’m NOT saying this Crime Against Shakespeare is fine, or good.  It shouldn’t have happened.  It’s unprofessional.   But as the BBC ought to know, it’s easily done.  There could, apparently, be up to 14,000 students affected out of a whole year cohort of 700,000.  I suspect that the ones with any nous will have avoided the question.  Others will have carried on regardless.  The exam board have already categorically stated that no student will unreasonably suffer as a result of their error.

What more do you want?  Blood?