The Taming Of The Shrew:  Act 1 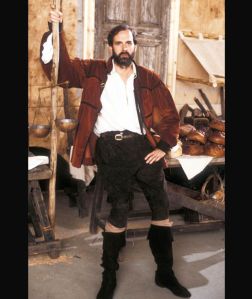 It’s been a while since I expressed some mild distaste at the prank played on the admittedly unsympathetic Christopher Sly at the beginning of this play.

(the reading continues to schedule, by the way, but I can see myself having to catch up on the act-by-act commentaries over the summer holidays)

Doing a bit of research – perhaps on the back of my reluctance to engage with the comedies, I found that the play has plenty of detractors, but I’ve seen it once – several years ago, at the Cambridge Shakespeare Festival – and enjoyed the performance.  The casting certainly seemed to back up Robert Atkins’ views:

“‘The Shrew’ may not be one of the best plays, but the parts of the two protagonists are worthy the consideration of the best players […] In the hands of skilful artists, the lesser roles also demand applause.”  Robert Atkins, 1960, in Introductions To Shakespeare (The Folio Society:  London, 1977)

There we had a blokey, chunky and unshaven Petruchio and a ‘pale and interesting’ red-headed Katherina, easy on the eye and driving a lot of the comedy through her impressive range of facial reactions.  I’m sure I’ll dig out a photo or two for my commentaries.  On this occasion, I’m also watching the 1980 BBC version, directed by Jonathan Miller and starring John Cleese and Sarah Badel, as I read along.  Possibly more of John Cleese at some stage …

We see very little of Katherina in Act 1:  just enough to make her appear furious and perhaps a little obnoxious, more than capable of making good her implied threat to:

‘comb your noddle with a three-legged stool

And, to be honest, who can blame her?  My sympathies lie with her at this stage – encompassed  by idiots.  When Tranio categorises her as:

I incline towards the latter.  With emphasis on the modern, complimentary use of ‘wonderful’.  Perhaps I’m betraying my taste in women here!  She’s of a type not dissimilar to Henry VI’s feisty French filly, Margaret, and strangely attractive for it – certainly by comparison to the weak and pliant Bianca and the doormat sign SHE is displaying for the approval of all these Early Modern types.  Or, of course, a more violently inclined prototype for Beatrice in Much Ado About Nothing.

But the opening act is mainly about the men.  On the whole, they’re not an impressive collection of specimens.  It’s a familiar trope, not just of Shakespeare but throughout art, that the servants are often brighter than the masters, and that’s where some of the comedy comes for me.  Think Blackadder and Prince George, or Jeeves and Wooster.  I certainly find myself drawn towards Tranio, playing his master like a fish:

LUCENTIO:  May it be done?

TRANIO: Not possible:  for who shall bear your part

And be in Padua here Vincentio’s son,

Keep his house and ply his book, welcome his friends

It’s a ‘cunning plan’ indeed, resulting in a nice little promotion for the servant, albeit a temporary one.  At least, unlike in the Induction, he is well aware of it.  Biondello is absolutely Baldrick in his confusion at the change of places.  I can’t find the exact clip, but it’s worth sharing this one, I think.

Where would The Boar’s Head be without a digression?  Now let me take you back 15 years or so, when I used to work for Royal Mail.  An often combative place between management and the ordinary ‘postie’, and with the benefit of hindsight, utterly hilarious at times.  The main weapon of the postie was ‘wilful obedience’: the carrying out – to the letter – of an ambiguous or ill thought-out instruction which often resulted in amusing consequences.  In the hands of the experienced practitioner, particularly against inexperienced managers, it was a beautiful thing to see in action.  And Shakespeare is the best practitioner of this, ever.  He nails it in the ways that the Gravedigger in Hamlet and the Cobbler in Julius Caesar answer questions with deliberate obtuseness.  We see it here, I think, when Grumio misunderstands Petruccio’s instructions:

Sure, he gets ‘wrung by the ears’ for his trouble, but his explanation later is pure Royal Mail:

‘O heavens, spake you not these words plain: “Sirrah, knock me here, rap me here, knock me well and knock me soundly’?  And come you now with knocking at the gate?’  (I.ii.39-42)

Grumio is wise enough not to take his master at his word and strike him, and instead wonderfully shows him up.  Because, I think, it’s important that Petruccio IS shown up a little.  He needs to be believable as less than perfect – as boorish, brusque, bonkers … as well as brilliant.  Not a traditional ‘pretty-boy’ lover, like Claudio in Much Ado.

Like Margaret before him in the Henriad, Petruccio uses a gorgeous set of rhetorical questions to evidence his disdain for the fear and warnings expressed by his new friends.  After all, to a ‘real’ man what is:

That gives not half so great a blow to hear

Having already had a taste of Katherina’s steel, I’m perfectly set up for the battle of the sexes in Act II …