Prepare yourself for a glorious improvement in your AO5 skills, comrades!

(For non-students, this is part of a series for my A Level students looking at important secondary texts which will assist their studies.) 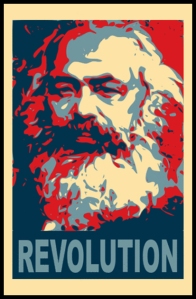 ‘Reading The Communist Manifesto does not make you a Communist, any more than reading the Bible makes you a Christian’

says Nigel Cawthorne in the introduction to my copy.  This reassuring sentiment is only slightly undermined by his point that:

‘While reading The Communist Manifesto, it is as well to remember that millions of people have shed blood over this document.’ As they have, to be fair, with last month’s text …

THIS is the power of ideas and words, people.

It’s hard to think of a more controversial text written in the last 200 years.  The term ‘Communism’ has been a constant ‘spectre’ (Marx’s term), a bogeyman haunting Western Civilisation.  This scary reputation has caused many to nervously avoid the book; for others, the danger sparks a seductive curiosity.

And this – for AO5 – is what Marxist critics do.  They interrogate texts in terms of class to arrive at alternative viewpoints.  And not solely class issues within the text, but also the contextual class situation of the author and his society.  They consider and highlight class inequality in very similar ways to the ways Feminists view gender bias.

So, objectively, what does The Communist Manifesto offer us?

Firstly, definitions and a clear understanding of how society is organised in terms of class: similarly to Communism and Marxism, terms like ‘Bourgeoisie’ and ‘Proletariat’ are often thrown about by people who don’t fully appreciate their meanings or significance.  The Manifesto also clarifies the aims and methods of the competing classes.

The text is deliberately confrontational, and bold – it’s easy to cherry-pick quotations according to your pre-existing prejudices – example: the stated aim of Communism is the:

What of course, this potentially frightening statement doesn’t take into account is how the writers redefine private property, how they contend that it is held in the hands of the very few, at the expense of the very many.  In some ways, they redefine the term.  Or their belief that the ‘superstructures’ that form society – religion, education, commerce, even the family and the country – are all set up to preserve the class status quo – for example, when it comes to the church:

‘the parson has ever gone hand in hand with the landlord’

For more on this, see Althusser, below.

Marx and Engels believed that as the gap between ‘haves’ and ‘have-nots’ widened, and as the Proletariat became aware not just of their conditions but of the barriers against their social mobility, revolution would be inevitable.  And that sheer weight of numbers would guarantee its success.  They posited that this revolution would have to far surpass previous ‘revolutions’ (which were in name only because they simply replaced one ruling group with another), by recreating society to benefit the many at the expense of a few.  It finishes with a provocative clarion call:

“The Communists disdain to conceal their views and aims.

They openly declare that their ends can be attained only by the forcible overthrow of all existing social conditions.

Let the ruling classes tremble at a Communistic revolution.

The proletarians have nothing to lose but their chains.

They have a world to win.

WORKING MEN OF ALL COUNTRIES, UNITE!”

Apply Marxist critical viewpoints to your studied texts for AO5:  Maud’s narrator has in many ways become class-less following that ‘failed speculation’, and pins his hopes of elevation, maybe salvation, on his newly-rich childhood sweetheart; the class struggles within Edward II ought to be obvious; and the personal contexts of the respective authors are significant.  But dig a little further – in On Chesil Beach, how important and insuperable is the class difference between the newly-weds?  Or how does class affect Ophelia’s treatment in Hamlet, both in life and death? What are the ‘superstructures’ within your texts –  how do they work to preserve or challenge social hierarchies?  How achievable is social mobility in the worlds you are exploring, or the worlds the authors inhabited?  Consider how society is stratified into classes in your dystopian texts, and the extent to which they differ to, or mirror, our society.  The Manifesto is an excellent comparative text when it comes to Goldstein’s book in Nineteen Eighty-Four.

REMEMBER – this does not replace your reading the original, but it should help you understand what to look out for when reading and applying what you’ve learned in your essays and exams …

NOTE:  those of you who are following will realise that episode 4 of the Cultural Capital series was published before episode 3!  Sorry about that …