… is that the job is, frankly, shit. And that you have to be a shit to do it successfully.

If you’re not ‘born great’, if you want to achieve greatness, you have to put in the hours, right?  Just think of the graft involved: wheeling and dealing; equivocating; making and breaking alliances; sucking up; marrying well (not, alas, for love); adding colours to the chameleon; changing shapes with Proteus; and generally setting the murderous Machiavel to school.

Shakespeare tells us again and again – via Macbeth, via Henry IV, via Brutus and Cassius; via Richard III, – that no sooner have you climbed the greasy pole to the very top, you realise that the view isn’t necessarily better.  Quite the opposite.  Certainly not as advertised …

Which is a shame, because you’ve really earned it, by that stage.

Uneasy lies the head that wears a crown. [a]

If Shakespeare has taught me anything, then, it’s that should anyone ever bow and call me ‘sire’, or use either of the phrases ‘long-lost scion’ or ‘true heir’ in my direction, Plan A is to distract them and then run as if my very life depended on it.  I’ll return specifically to the curse of kings later …

So to John.  Act IV is where this hitherto rather bland king comes into his own.  The Bastard stops trying to be funny, the main bickering women die (coincidentally and ahistorically on the same day), and we see the better play inhabiting the script like Webster’s skull beneath the skin. [b] And that means John, who has proved to be a bit of a mummy’s boy, and foolish enough to give away his French possessions to maintain his English ones, becomes a bad king, who needs to be whacked on the nose with a newspaper.  He kicks off with another coronation, like a man who needs all the validation he can get.  But that’s a temporary and unpopular distraction from the problem that is Arthur …

What’s John to do? You simply cannot have any realistic pretender to the throne hanging around, as we discussed last time round.  The age – historically 15, if I recall correctly, but in the play surely younger – of that pretender is immaterial: just ask Henry Bolingbroke.  But – and ‘conscience’ is mentioned six times in the play – Hubert cannot do the deed:

‘Hubert for the wealth of all the world

Arthur has earned his reprieve, I think.  We need to remember that by any chronology, this isn’t an ‘early’ play: I found plenty of wonderfully written passages in previous acts, but they begin to come thick and fast now.  Feel the poetry here:

ARTHUR     Is there no remedy?

ARTHUR     O God, that there were but a mote in yours,

A grain, a dust, a gnat, a wandering hair,

Any annoyance in that precious sense,

Then, feeling what small things are boist’rous there,

Arthur’s reprieve is such an interesting part in the play.  Yet it is, to come over all Shakespearean, ‘bootless‘.  John derives no benefit from it at all … 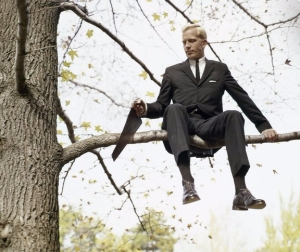 Ages ago I created a kingship paradigm, using the analogy of a four-legged stool to explore the things a successful monarch needs.  One leg – his self-assurance of his legitimacy – was always a bit wobbly, and by the end of the third act John’s sawn off the supporting leg of the church.  Here, his intended treatment of Arthur – even as we enjoy the dramatic irony that his orders haven’t been carried out – saws off the remaining legs.

Clatter!  There go the nobility:

PEMBROKE:  Indeed we heard how near his death he was

Before the child himself felt he was sick.

HUBERT:  Young Arthur’s death is common in their mouths,

And when they talk of him they shake their heads;

NOW, finally, we are back to that burger that was ‘not as advertised’.

You know what?  It works both ways, fella …

If kingship isn’t what you wanted it to be, might there be a correlation to the kind of job you are doing?  Never mind alienating people with your poor choices, you are paid take big decisions, to step up, and to own up.  You’re not the leader the job spec demands … John’s attempt to blame Hubert for his own order to murder Arthur is the worst kind of specious sophistry, and he’s fooling no-one.  To paraphrase Henry V, I was not angry, since The Taming of the Shrew, until this instant.  Actually I have been – very, very angry – but not at any of the characters in our plays, just at our equally mendacious politicians.  No-one likes liars.

All this means, ironically and rather weirdly, that when Arthur actually does die and John is blamed, I’m perversely gratified by the untimely death of an inoffensive young man who was perhaps born to greatness but in his conversation with Hubert, evidently didn’t really want it:

So I were out of prison and kept sheep

If Hubert’s ghost is wandering the midnight castle looking for revenge, it appears it might arrive soon.  His uncle has become:

[b] TS Eliot, ‘Whispers of Immortality’ (1919), at https://www.poetryfoundation.org/poems/52563/whispers-of-immortality