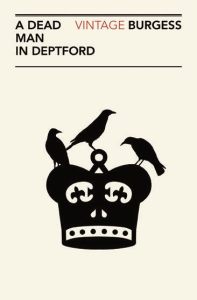 I’ve been known to use A Clockwork Orange as a way of accessing Shakespeare: if you can decipher Burgess’s prose in that, my reasoning goes, Shakespeare should hold few terrors for you – simply apply the same skills.  That’s a dazzling novel.  So I approached A Dead Man in Deptford with some excitement and expectation, stoked by one of the most visually arresting book covers I’ve seen in years.

Burgess’ prose won’t be to everyone’s taste.  It’s rich, meaty, and requires some perseverance to unlock.  The themes of the novel are too, so readers who seek something less demanding are going to be left puzzled and frustrated.  You need to concentrate, and I needed to read it in chunks as one of several books I had on the go.  But the cognitive dissonance provoked by all the strangeness adds to the immersive qualities of the book, and I demolished the final third in a sitting.

The plot fictionalises the final chapters of Christopher Marlowe’s life, broadly from his induction into the seedy underworld of Sir Francis Walsingham’s spy network until his tragic – in the true sense of the word – death at just 29.  It’s told in unflinching detail: the bombast, the blasphemy, and the buggery are all there, told by an anonymous narrator, sometime outlet for Kit’s sexual urges.  Ignore the reviews that take an excessive interest in the homosexual scenes, though.  The writing is, as I say, unflinching, but not lurid.  If like me, you’ve read Charles Nicholl‘s The Reckoning (Cape, 1992) – which I highly recommend for anyone who wants a more forensic, factual account – the cast is largely familiar to you.  Shakespeare makes a cameo, but Burgess is too skilled a writer to do more than flesh him out as a bit unlikable and move on.

But then, no-one in the novel is likeable – not even Kit.  These are grim, suspicious times, when the consequences of trusting the wrong person, of nailing your colours to the wrong mast, can be worse than death.  Honour and principles seem luxuries when death really does stalk the streets of Marlowe’s London: there are thugs, the general underworld flavour, sure, but also bravoes hired by creditors or professional competitors; the Privy council, alert to any whiff of unorthodoxy; the ruthless network of double and triple agents nervously circling each other; and there is, of course, the plague.

Ultimately, this is a saddening tale of a man dragged – we might say by love – into a life he loathes but cannot escape, no matter how much he wants to.  It’s poignant, it’s interesting, and I really enjoyed it.