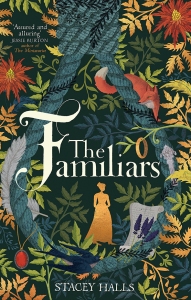 Despite the anachronism of Elizabeth I’s lengthy reign, the late sixteenth and early seventeenth centuries provide rich pickings for any author attempting to write a feminist exposition of the harsh injustices visited on so many women.

Perhaps there’s none harsher than the treatment of witches …

Halls chooses the Pendle Witch trials as the setting for her minor polemic.  The plot centres round the latest pregnancy of a wilful first-person narrator, Fleetwood Shuttleworth, who has suffered the tragedy of several miscarriages.  Her natural misgivings about the next few months are compounded by a letter that comes into her possession.  Her marriage to Richard seems unaccountably threatened, her relationship with her mother is difficult, and as a teenager, she is struggling to exert her authority over the household that she is mistress of.  Then, in a pastiche of the riding accident that introduces Jane Eyre and Edward Rochester to each other, she begins a friendship with Alice Grey, who is soon installed as her midwife.  The drama centres around two questions: will Fleetwood and her child survive childbirth, and what will happen to Alice, as she is unjustly implicated in the Pendle witchcraft accusations?  That said, given the novel is written first-person and in the past tense, I never felt any real worry that Fleetwood might die.

And off we go, following Fleetwood as she gallops recklessly round the North of England, resolving various tensions and conflicts that arise, trying to hold onto both her baby and her new friend.  We never meet a likeable man in the book (not even Richard), whilst encountering practically every type of female suffering.  It would be unfair to label Halls as having a misandrist Agenda (capitalisation intended), but her bias shows almost as often as Fleetwood’s baby bump.  The ending is far from satisfactory, with too many issues resolved far too easily as and when Fleetwood goes into labour.

Another issue in the novel is its historical grounding.  There’s a balance to strike between clumsy exposition of all the background an author has researched and too light a touch.  Here we have the latter.  Some contemporary descriptions of meals, and herb craft, stick out but otherwise, not least with the language and tone of the dialogue, I never really felt immersed in time and place.  Flippantly, I mentally began retitling the work, The UNfamiliars from about half way onwards.  It was 1612, but not as I knew it.

Overall, the book said nothing to me, and its entertainment value was low.  I hesitate to say it, but this novel felt like it was very specifically written for women to read.  Other writers I’ve read this year – for this time period I’m thinking specifically of Shirley McKay – write more immersively, atmospherically, and empathically about the ‘female condition’ less adversarially, always reminding us of the common humanity of the genders.  Try her, or Patricia Finney (writing as PF Chisholm), instead.