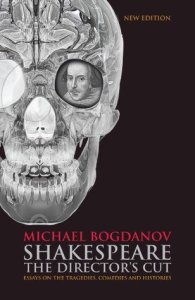 As soon as I read the Introduction to Bogdanov’s book, I blogged excitedly about it – I sensed a kindred spirit: someone I would have enjoyed a boisterous, passionate debate with over a few drinks.

The book consistently lived up to the opening fireworks. It consists of a suite of lively, thought-provoking and refreshingly irreverent essays on plays that Bogdanov has been professionally involved in bringing to the stage. To this end, there’s a brisk practicality about some of his commentary that those not involved in stagecraft might find insightful.

Bogdanov’s writing style is peppered with rapid-fire questions and links to modern situations and politics. He jumps, restlessly, from idea to idea, often leaving us with a ‘drop-mic’ moment before leaping to another mad notion. Here’s an example:

“What is his [Malcolm’s] reaction on being present when Macduff receives the news of the slaughter of his family?

“Be this the whetstone of your sword; let grief
Convert to anger; Blunt not the heart, enrage it (Act IV, scene iii)

Use it, Macduff, use it!

Malcolm seizes with alacrity the opportunity offered him on a plate. Here’s the perfect guy to do the work of sorting out Macbeth for him. Macduff’s consuming desire for revenge makes him the ideal weapon of mass destruction. Malcolm can send him in to do battle against Macbeth without having to put himself anywhere near the front line. Then walk in and claim the victory. What a shit.”

If you’re a student of just one Shakespeare play, it might be worth trying to get hold of a copy from a library to read the associated essay; anyone with a broader interest in the plays should buy and enjoy it!