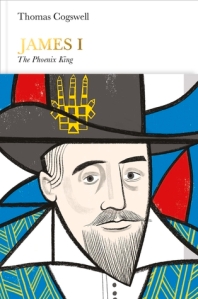 Thomas Cogswell’s biography is recognisably one of the Penguin Monarchs series.  That means it’s concise (just 109 pages) and informative; a good general introduction to the king who succeeded Elizabeth. For those studying Shakespeare or the Early Modern period, the information about James’ early life is useful and potentially revealing.

News, or ‘Newes’ from Scotland will have been relatively easily available during the three decades or so that he ruled (to varying degrees) in stead of his Mother – Mary, Queen of Scots. Comparisons to Elizabeth will have been inevitable, and it’s plausible that his personality and behaviours were caricatured and held up for inspection in London’s theatres.

Cogswell’s work seemed more sympathetic to James than the detachment shown by others in the series, such as by Helen Castor in her work on Elizabeth. Perhaps he feels the need to balance the popular view of James. For the opposite, almost comically scornful view, try Thomas Babington Macaulay‘s portrait in his ‘History of England‘.