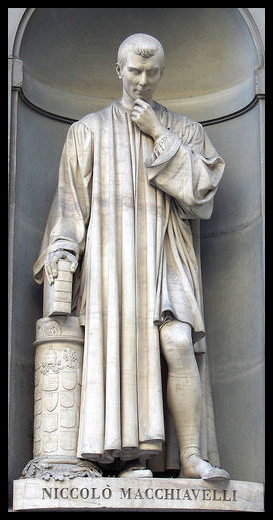 Subtitled:  The Curse of the ‘Without-Whoms’

This is close to the top of my list of for the Cultural Capital series – a short, highly influential read, freely available: something which, frankly, you ought to have read by the time you hit university – whether or not you are an English Lit student.  It’s the kind of thing that certain people, in certain circles, will expect you to have a working knowledge of in the big bad world.

Anyway, to this week’s quotation.  Consider the following:

Imagine you have been someone’s wing-man, for richer or poorer, through thick and thin, in good times and bad, until they – finally – make it. Time to kick back with a well-earned reward, you’d guess?  Margaritas all round, right? Or, put the shoe on the other foot – you’ve got where you have always wanted to be, and there is one person you simply couldn’t age done it without.  You owe it all to them, and you’re going to pay them back, right?  Not according to Machiavelli.  Success is the end of any beautiful friendship.  Perhaps beautiful friendships can only be formed and exist in adversity?  Or am I being cynical?  Here’s Machiavelli on the subject:

‘he who is the cause of another becoming powerful is ruined; because that predominancy has been brought about either by astuteness or else by force, and both are distrusted by him who has been raised to power.’

The British Library tells us that The Prince (in untranslated form) would have arrived in England about 1580, and suggests that the influence of its manifesto for effective – if not always benevolent – leadership is easily seen in Marlowe‘s early plays.

And in class, I spend a lot of time thinking about the difference between an effective and a kind king …

In choosing this quotation, I look back – and forward, depending on the class – to my teaching of Richard III, to years 9, 12 and 13.  Particularly, we need to talk about the Duke of Buckingham in relation to this quotation, although for those following PTS generally we have another great example in Warwick the Kingmaker, and his uneasy relationship with Edward IV as the HVI plays rattle on. Or the early interactions between Harry Percy and Henry IV in Richard II, and Hotspur’s belief that his family had unjustly been overlooked, looking past the PTS project’s immediate horizon.  Look at this from Percy, as an example:

‘Revenge the jeering and disdained contempt

Of this proud King, who studies day and night

To answer all the debt he owes to you

Either way, the point is simple. if you help someone achieve supremacy, Machiavelli says your relationship is doomed as soon as your joint mission is accomplished.  Buckingham‘s astuteness raises Richard III to the pinnacle; Warwick‘s force does likewise, and what is their reward? Mistrust, betrayal and abandonment of the type usually reserved for Falstaff.

So, to paraphrase NM: ‘don’t expect gratitude from anyone who makes it thanks to you.’

An important life lesson for us all, perhaps, which is one off the reasons why Il Principe remains such a ‘sexy’ text almost 500 years after its first publication.

Machiavelli’s work is widely available for free, via Project Gutenberg and elsewhere.  This quotation is taken from my kindle edition, published by Wisehouse Classics.