“Is black so base a hue?” Aaron, Titus Andronicus, Act IV scene ii …

Whilst Black History Month isn’t celebrated in the UK until October, this is a bit of an international blog: about half of you are visitors from the US, and another quarter or so from elsewhere outside the UK – thank you, by the way!

So now, whilst I’m reading Scott’s book, feels like the time to look at this …

Scott’s work is a kind of anthology, full of interesting contemporary descriptions of witches, witchcraft, torture, trials and so on.  I bought it expecting (and getting) something I could use in teaching Macbeth, but it wasn’t that material which set me thinking.

Reginald Scot‘s, Discoverie of Witchcraft (1584), which Scott quotes from many times, is ironically a text which seeks to challenge the existence of witches. In fact, Scott suggests that James I‘s Daemonologie (1597) was written in response to it.  Scot’s efforts to expose the absurdity of this belief included a summary of how devils were described in order to frighten young children into obedience – my quote of the week:

… an ugly devil having horns on his head, fire in his mouth, and a tail in his breech, eyes like a basin, fangs like a dog, claws like a bear, a skin like a n_____, and a voice roaring like a lion …

Why does the devil have to be black?

Not least when nowadays we tend to think of him as red?

Regular readers will know my affinity for Caliban, the:

Prospero is ‘forced’ to acknowledge as his.  A man, originally at least morally neutral if not inclined to good, who is turned by the way he is treated on the criteria of his appearance.  Exactly the same, I’d suggest, as Frankenstein’s creation:

‘How can I describe my emotions at this catastrophe, or how delineate the wretch whom with such infinite pains and care I had endeavoured to form? His limbs were in proportion, and I had selected his features as beautiful. Beautiful! Great God!’

or, to a lesser extent, Heathcliff in Wuthering Heights:

‘See here, wife!  I was never so beaten with anything in my life: but you must e’en take it as a gift of God; though it’s as dark almost as if it came from the devil. We crowded round, and over Miss Cathy’s head I had a peep at a dirty, ragged, black-haired child’. [My emphasis]

And back to Shakespeare – look at Othello:

EMILIA:  O, the more angel she,

Having identified this unsatisfactory state of affairs, can we investigate and in some measure explain it (NOT condone it), rather than simplistically dismissing it as racism?  I don’t accept statements like; ‘People were racist in those days’ from my students in their essays, so what more can I add?

Firstly, perhaps we should consider the Devil as the antithesis of God.  If God is Mr ‘let there be light‘, then Satan must almost inevitably become the ‘Prince of Darkness’.  Not least because his pre-Fall name was ‘Lucifer’, light-bringer.  The contrast serves to accentuate the severity of his punishment.  Variously and often vicariously, humans are and have always been ‘sun-worshippers’, and in Shakespearean context, we associate the sun with Kingship:

See, see, King Richard doth himself appear,
As doth the blushing discontented sun
From out the fiery portal of the east,
When he perceives the envious clouds are bent
To dim his glory and to stain the track
Of his bright passage to the occident.  (Act III, sc iii)

was this the face
That, like the sun, did make beholders wink? (Act IV, sc i)

If we look up, to the sun, for Heaven, then we look directly down, into the pit where light does not reach, for Hell.  That’s where Dante placed the Devil, of course (as an interesting side note, the Devil is not black in Inferno).  Down where the light doesn’t reach.  It’s no coincidence that Macbeth demurs at killing Duncan, thinking of the ‘deep damnation’ the murder will earn him.  Physical height is important everywhere in the EMP, by the way:  for example, look at the ‘Great Chain of Being‘ as it applies to birds, with high flying eagles at the top, and ground-dwelling wrens at the opposite end.  Returning briefly to Richard II, one of the most symbolic moments in the play, and the transfer of the monarchy to Bolingbroke, is when he comes down to speak to him at Flint Castle.

Next, black isn’t just associated with evil; it also has connotations of death. In Hamlet, our young prince is urged to cast off his ‘trappings and suits of woe’, although he protests his grief is more than skin deep:

Black is also the time of evil, the time to be afraid – for, I think, a simple reason.  Biologically, we rely on our eyesight, and when that isn’t functioning, we are vulnerable, and scared.  It’s a time when bad people think they can get away with their crimes – see Lady Macbeth:

Come, thick night,
And pall thee in the dunnest smoke of hell,
That my keen knife see not the wound it makes,
Nor heaven peep through the blanket of the dark,
To cry ‘Hold, hold!’  (Act I, sc v)

So far, so good.  But we shouldn’t, mustn’t, deny the role simple racism has to play. 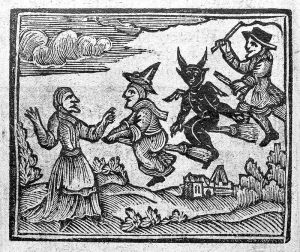 And I think fear is at the heart of it.  Fear of the potential strength of black people, fear of their perceived otherness (not forgetting that Hawkins’ slavery voyages commenced only two years before Shakespeare was born), or more interestingly, fear of sameness.  Hawkins’ actions become unacceptable at precisely the moment that you concede that the slaves were human beings.  When I – eventually – get to The Tempest in my potential read-through, I’ll definitely want to discuss Caliban’s ability to speak English.  But that’s for another time.

Perhaps it has been, historically, fear of ourselves that drives racism.  A denial of our capacity for evil projects those vices and acts we are all too capable of onto others.  It allows a kind of doublethink that self-justifies appalling actions:

‘I was possessed by the devil, honest, guv!’

Maybe the devil is always black to reflect the potential ‘blackness’ in our own hearts, regardless of our skin colour?