Episode 6 of Forensic Friday – the rules are here for first-timers – effectively kicks off this summer’s likely obsession with Marlowe.

My OCR A Level students are not obliged to analyse Edward II in this way; perhaps they’ll wonder at the point of today’s exercise.  The point is that you ought to be able to do this – and enjoy the process – for any text, people.  We are, after all, archaeologists of the written word – this is what we do …

Anyway, here’s a tiny extract that speaks volumes about Edward II’s lover and their relationship … 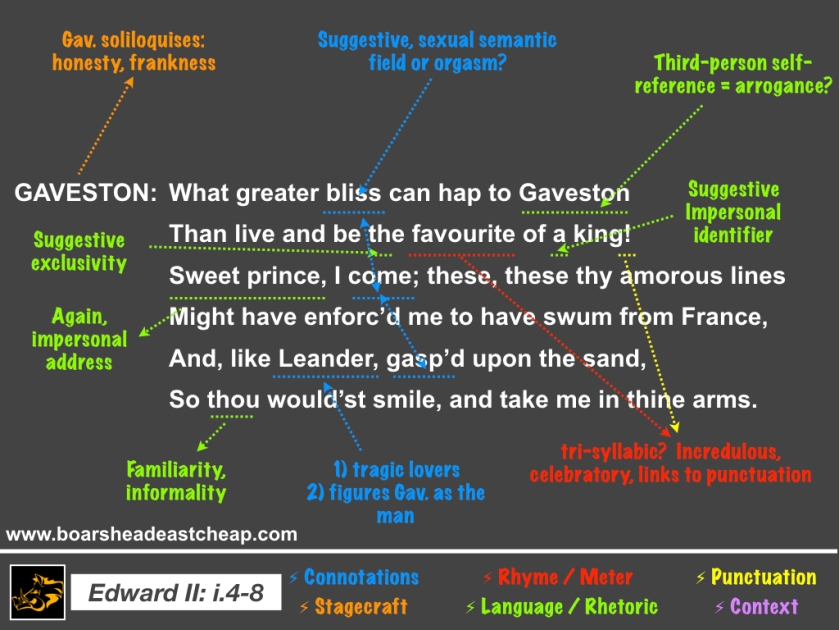 How does Marlowe use language for dramatic effect in this extract?

Marlowe’s use of soliloquy allows Gaveston to speak frankly; only a few lines into the play we view him with distaste, as facets of his personality and relationship with Edward are revealed.

Gaveston’s first unpalatable quality is pomposity: his detached, third-person self-referral recalls the arrogance of Shakespeare’s Julius Caesar.  His consistent use of the informal, familiar ‘thou’ address towards Edward, a king, compounds this.

The most unpalatable aspect of the soliloquy is, however, that this informality seems little to do with love, at least on Gaveston’s side.  Marlowe skilfully uses small but revealing details to imply that Gaveston is interested in Edward’s title.  Thus, Gaveston does not name Edward at the first two opportunities:  ‘a king’ is strangely impersonal, as if any king might suffice.  Whilst ‘Sweet prince’ seems a little more affectionate, Marlowe arguably refuses to name Edward, even though it would not have disrupted the metre.  In the first, breathlessly enjambed sentence, the  exclamative punctuation, matched by tri-syllabic pronunciation of ‘favourite’, adds an emotional sense of having triumphed in securing the lover’s wealth, not the man himself.

And Gaveston does feel secure.  Whilst his allusion to Hero and Leander is interesting as part of a series of identifications with doomed lovers, what Marlowe also does here is figure Gaveston in the male lover’s role: as Leander.  Beyond sounding conventionally romantic, Gaveston’s use of ‘gasp’d’ is one in a series of potentially lewd euphemisms for orgasm.  He anticipates spending Edward’s money and – distastefully – spending himself on a reigning monarch.