Tragedy!  When the  feeling’s gone and you can’t go on …

It’s not that long ago that I appalled a class by stating that whilst the death of a pet dog might be ‘quite sad’, it definitely wasn’t ‘tragic’. ^

I definitely spend too much time in the late 16th century!

Apart from getting a better idea of where I’m coming from (I think ‘tragic’ (like ‘passionate’) is a horribly overused word), it will definitely help your AO1, AO3 and AO5 to get a grip on the genre (my students will understand the colours).  So let’s take a whistle-stop tour of Tragedy with a capital ’T’ …

Tragedy is pretty much as old as storytelling:  its etymology suggests tragedies were performed at festivals, either for prizes or as part of ritual.  It’s also, I think, the most important of dramatic genres.  A first documented ‘golden age’ appears to have taken place about 2,500 years ago in what we now know as Ancient Greece.  It’s worth getting to know a couple of key figures from that period before we fast-forward to 16th-century England. 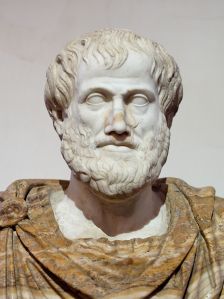 Aristotle’s Poetics (c.335 BCE), which you can read for free here, is the first recognised attempt to classify the genre.  Aristotle provides us with several useful key terms for analysing a tragedy:

Hamartia:  the ‘fatal flaw’ or miscalculation that ultimately brings a hero down (many commentators classify it simply as a type of hubris, or excessive pride);

Peripeteia: a reversal of fortune;

Anagnorisis:  a moment of ‘recognition’ or ‘identification’ before our hero dies;

Catharsis: the complex mix of emotions the audience feels at the end of a tragedy.  These might include pity for the fallen hero; regret at the passing of an individual who is larger than life; relief that order has been restored by the hero’s necessary death; and fear at the realisation that the hero’s human flaw could happen to anyone …

These plays often featured a chorus (of the type we see at the beginning of Romeo and Juliet, or perhaps before the play-within-a-play in Hamlet), to comment on the action.  They tended, though, to follow a single plot-line and the ‘unities of time and space’, meaning linear, real-time chronologies and less creative use of location.

Whilst Aristotle gave us a working vocabulary for the genre, I’m inclined to believe that our Renaissance playwrights owe a greater debt to Seneca.

We think that less than ten of Seneca’s plays survive, but they provided an exciting blueprint for the type of play Elizabethan audiences flocked to see, as Drama evolved from the moralising and one-dimensional religious Morality Plays which dominated Medieval England.  Seneca’s works are bloody, often spooky, and feature both soliloquy and multiple plot strands.  Many are based on revenge themes.

It’s worth pointing out that our playwrights weren’t the only ones exploring the tragic form.  Thomas Kyd’s The Spanish Tragedy was THE box office hit of the 1590s (interesting side note: the term ‘box office’ derives from this period – a secure room where ‘boxes’ – clay piggy-banks that punters paid their entrance fee into – were smashed and the proceeds collected).

Contextually, Elizabethan England was fertile ground for Tragedy.  The end of the medieval feudal system had been replaced by the promise of social mobility through education and patronage.  Society publicly denounced Machiavelli’s works whilst studying his ‘self-help’ books in private.[a]  Religious strife and superstition often ended with the most bloody public performances of all: the hanging, drawing and quartering of traitors.

The population couldn’t get enough of stories – true or fabricated – of the rise and fall of celebrities.  In some ways, when we look at our tabloids and magazines, so little has changed!

We can classify Elizabethan Tragedy in three ways:

Finally, let’s extend our definitions a little, toward more modern texts.  I’ll leave you to consider to what extent A Streetcar Named Desire is tragic.  Or ‘Maud’.  Or On Chesil Beach …

^ No pet dogs were harmed in the writing of this article.