‘You will, generally, be rewarded for originality, but the crazier your argument is, the better your reasoning should be’. 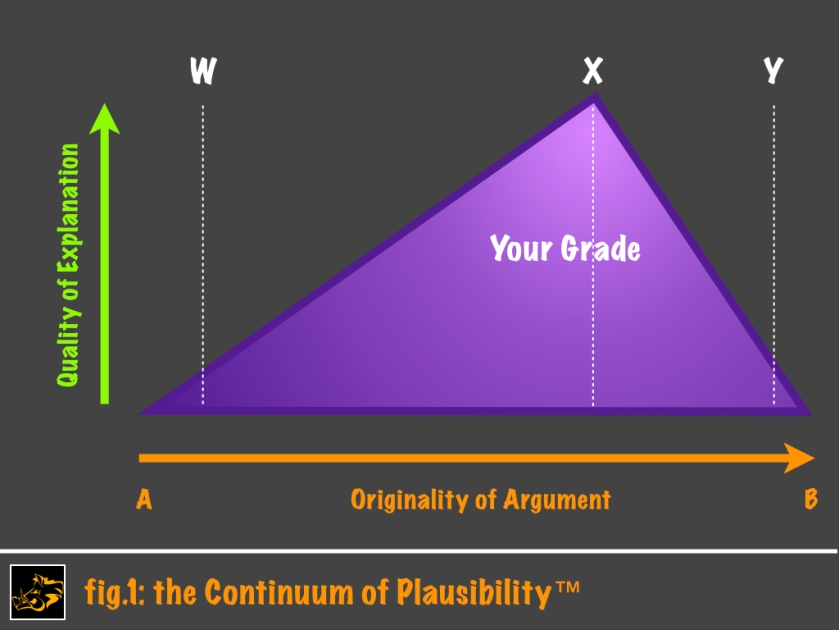 Originally intended as a confidence-builder for the chronically-tentative, it’s become a cliché in my teaching that ‘in English, there’s no such thing as a wrong answer’. Increasingly, though, and especially at A Level, I’m finding it necessary to qualify that empowering notion.  Perhaps students were getting a little too emboldened, as we’ll see below.  Just as Squealer in Animal Farm reminds us that ‘Some animals are more equal than others’, some answers are – obviously – better than others. [a]

Almost organically, as I refined the concept, it came to be known as The Continuum of Plausibility™.  I’ve been using the term here, off and on, for a while now without properly explaining it, so here goes.

Before we dig into the detail, let’s distil this into a single shot-glass of meaning:

‘You will, generally, be rewarded for originality, but the crazier your argument is, the better your reasoning should be’.

Remember: examiners at both GCSE and A Level are required to ‘give credit for all valid interpretations.’ And they read a LOT of average, uninteresting stuff.  It’s almost inevitable that they long for something original amongst all the dross, be that good or laughably bad.  The key word here is ‘VALID‘ …

Look again, students, at that purple triangle above you: your grade is somewhere in there – the higher vertically, the higher your mark.  Simple as that.

Think about point ‘A’ as stating the bleedin’ obvious, or more formally, the ‘truism’.  There’s no opinion or argument at all – just a statement of fact.  Common example?

“In this extract Shakespeare uses language and imagery to describe the witches.”

Erm, he’s a writer – what else is he supposed to use?  Organic vegetables?

At the other end of the spectrum we have point ‘B’, which we might describe as the ‘literary hallucination’ – an assertion which is simply indefensible.  At this point, the student is either trying too hard, or has lost their grip on reality.  Real life example?

“Macbeth does not like people who change gender as he sees them as cowards.”

<<—  If your brain does this when you read Shakespeare, there is no reason why you should inflict that on your teacher or markers, thanks very much …

Clearly, either end is to be avoided.  You must say something, and you want to stay away from the run of the mill answers, but as you head along from A to B your analysis is going to have to be more and more plausible – which leads us to the vertical axis.

If we think, in simple terms, of the X-axis as AO1 in all your assignments (at GCSE and A Level), then think of this axis as all/any other AOs you are being marked on in this answer.  You should use them in combination to support what you are asserting.  Most of the time, if you think about it, this section is worth more marks than your AO1: for example, at GCSE, AO1 is only worth 40%, and it is usually worth less than that at A Level.  I like to think this supports my original assertion that you can pretty much say what you want, as long as you can back it up …

Again, what you are aiming for here is overall plausibility.  As I said at the beginning, the crazier your opening idea, the harder you are going to have to work to get your marker to take you seriously.

At the bottom of the axis, we have the circular argument – example:

“The word ‘villain’ in my opinion means he wants to be a villain.”

At the top end we have something carefully and convincingly crafted to support the overall idea / argument.  As a minimum it will explore the writer’s intentions, technique, and audience’s response – the rest depends on the other assessment objectives you are being judged on.

Let’s imagine that students have been given Lady Macbeth’s famous line:

Student W has played safe and just about avoided the truism.  They may have written something like:

‘In this extract Lady Macbeth is asking the evils spirits to remove her femininity.  She commands  with an imperative the spirits to ‘unsex’ her. The verb suggests that she is going to turn into a man.  This will make her more powerful and capable of being cruel even if her husband Macbeth isn’t.  Then she can take charge of the plans to kill Duncan and achieve her ambition of being queen of Scotland.’

Student X has an original idea, and I think explains it quite carefully and plausibly:

‘Shakespeare initially plays to the stereotypical Renaissance view of women as the gentler sex.  However, Lady Macbeth also understands there are limitations to men, like her husband: being a man is not enough.  The imperative ‘unsex me here’ does not make her masculine – rather it renders her neuter, inhuman and therefore monstrous.  Shockingly, she is willing to dehumanise herself, removing any trace of empathy or ‘human kindness’ in her plotting.’

Student Y is ambitious, too literal, and also slightly hallucinatory.  Most importantly, it’s implausible.  There’s not much there worthy of credit, any more than student W’s answer:

‘This line shows us that Lady Macbeth wants to be the fourth witch.  Earlier, we saw that ‘they should be women’, but their gender was unclear.  Now she is calling on the spirits that control them to ‘unsex’ her, too.  She knows that women are traditionally gentle and empathic, and to become Queen she needs to set that aside.  Shakespeare might be using the verb ‘come’ as a euphemism – she is willing to have sex with the spirits (like witches did) to be ‘unsexed’ for human beings, if she gets what she wants.’

Your job?  Look closely at the differences between the students.

IMPORTANT – it’s not simply about writing the longest answer.  Anyone can waffle on endlessly and pointlessly.

One thought on “Continuum of Plausibility™”