Infamy, infamy, they’ve all got it infamy …

Maybe it’s growing up in the 70s, but I enjoy an infantile dirty joke as much, if not more, than the next fellow.  They don’t always work in the plays, or perhaps audiences are now vastly more sophisticated: I can imagine that even the weakest ones would have had them rolling in the aisles at The Globe.

This week, I decided to work my favourite Shakespearean knob-gag … ooh err!

Here’s the extract.  For those of you who don’t know what’s happening, right at the beginning of Julius Caesar the common labourers have downed tools and taken an unlicensed day off.  Whilst is the feast of Lupercal, traditionally associated with fertility, the citizens are much keener to see their great hero, Caesar.  Murellus and Flavius, two of Rome’s five tribunes, attempt to quell the sudden appearance of this celebrating mob in the city’s streets, but soon become flustered. 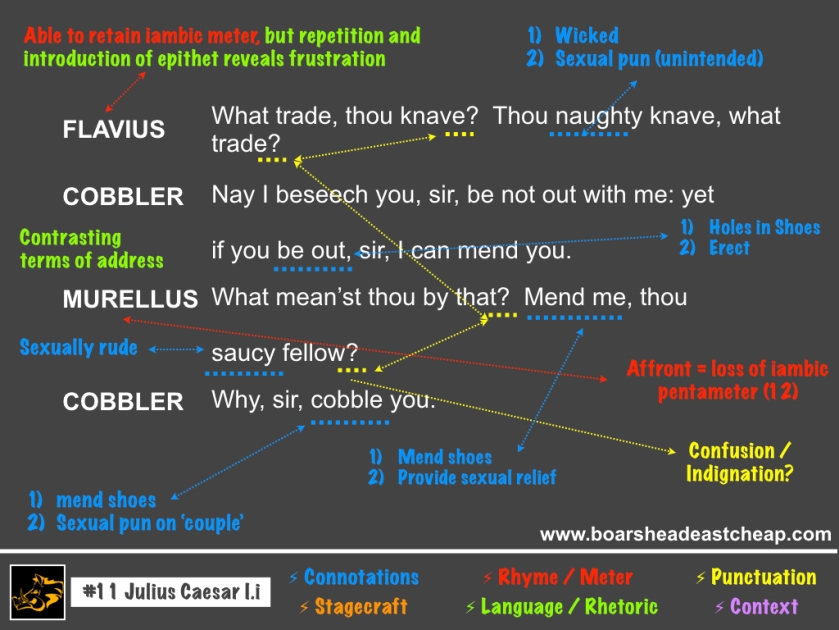 The ‘rules of the game’ are simple, and can be found here.  For the lazy, the quotation needs analysing to OCR A Level spec in 250 words.

HOW DOES SHAKESPEARE USE LANGUAGE FOR DRAMATIC EFFECT?

Shakespeare creates an early microcosm of the play’s battle between hearts and minds, emotion and logic, foreshadowing Antony’s triumph over Brutus at Caesar’s funeral.  Simultaneously, he affectionately acknowledges the wit and power of the ordinary citizen.  Whilst Flavius manages to preserve the blank verse metre in his line, he is evidently exasperated, capable only of repeating his question (one of four the confused Tribunes ask) with an additional epithet.  Unfortunately for him, but comically for the audience, the Cobbler wilfully seizes on the sexual connotations of ‘naught’.  Speaking in class-appropriate prose, unfailingly polite in his repeated use of the respectful ‘you’ and ‘beseech’, he still manages to deliver a covert insult.  Couched in the jargon of his trade, he simultaneously offers to repair Flavius’ footwear and imply that the Tribune is importuning him for sex.  We, and the Cobbler’s fellows in the crowd both off and on-stage, understand that Shakespeare’s repetition of ‘be out with’ wonderfully suggests that Flavius is priapic – lending an audacious, secondary connotation to the offer to ‘mend’ Flavius: the Cobbler is offering to relieve his sexual tension.  As edited*, the next line is attributed to Murellus, who seems to intervene on his hapless partner’s behalf, fully understanding the slight, as evidenced by his epithet, ‘saucy’.  Indignantly, disrupting the meter appropriate for his station, he seeks clarification of the verb ‘mend’.  Again with seeming innocence, ‘cobble’ both answers the Tribune and produces a bawdy pun on ‘couple’.  Shakespeare’s everyman Cobbler easily outwits the staid Tribunes. [250 words]