Telling stories ABOUT stories seems to be my stock-in-trade when it comes to teaching Shakespeare.

Unusually, I’m going to start with the quotation of the week, from Stephen Greenblatt, rather than work towards it:

Humans cannot live without stories. We surround ourselves with them; we make them up in our sleep; we tell them to our children; we pay to have them told to us. Some of us create them professionally. And a few of us – myself included – spend our entire adult lives trying to understand their beauty, power, and influence. [a]

Greenblatt’s final sentence sums up my enchantment, no other word, with any well-told story.  They are magic tricks, and whilst not wanting to perform them myself, I want very much to find out how they are performed.  I’m pretty certain it was Stephen King who first vocalized what I’d known, subliminally, since I could read:  that ‘story is everything.‘ [b]

Story does seem to be everything, in my job.  From ignoring the intrusive political-correctness in the adaptation of Peter Pan that we took our year 7s to last week, to the piece I recently wrote on Dystopia and Post-Apocalyptic Literature for our in-house magazine, which ended:

These are the gods we fear in the twenty-first century. We fight them in the same way as we have always fought what scared us.

We diminish the terrors roaming just beyond the campfire by warning of the consequences of straying beyond the light it provides. By bringing those gods/monsters down to human scale.  By talking of the heroes who have opposed them: honouring those who fought and lost as well as those who survived.

To my day-to-day teaching of Shakespeare?  Of course!

Firstly, in the counter-narrative that the plays are not boring.  Or in another language.  Or, actually, that they were written by someone else (as if that mattered); in this I’m minded of another Stephen King quotation:

Next, in bringing the stories to life for the students.  And, it’s odd (or maybe it isn’t) how often, in making the plays ‘relatable’, that I tell modern tales to present the moral dilemmas the characters face.  I tell stories to ‘diminish the terror’ of the plays to those who have an inbuilt resistance to Shakespeare, for whatever reason. 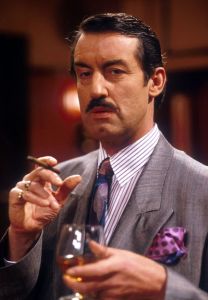 ‘Your mum and dad split up.  In no time at all, your mum has moved a new man in: a sleazy, greasy, second-hand car salesman-type.  All tan leather jacket, 70s ‘cockduster’ moustache, orange Ford Capri and hands like a hyperactive octopus … think John Challis (Boycie) in Only Fools and Horses, but more aggressively sexual.

He keeps clapping you on the shoulder, calling you ‘son’/’princess’.

You haven’t seen or spoken to your dad in weeks …’

NOW put yourself in Hamlet‘s position.  Or Edward III‘s, faced with Mortimer.

Let’s return to the original quotation, to finish off.  After a ‘heavy’ session with my Y13 class last week, talking about ‘conscience as social control’, surely – with my Feminist hat on – the story of Adam and Eve is no different?

All of my selected A-Level texts have several things in common, usually to do with class inequality and social mobility.  But they all, like Adam and Eve, also suggest that an independent woman at a loose end – Eve, Isabella (in Edward II), Margaret (in Richard III), ‘Maud’ (in Tennyson‘s poem), and Florence (in McEwan‘s On Chesil Beach) – is going to cause nothing but trouble.

And we’ve opened the Marlovian can of worms where the Bible is nothing but a manual for ‘awe’: social control by another name …

[b] I’m trying really hard to find the exact quotation but struggling.  Please let me know if you can find it.  For the moment, I’m going to credit Stephen King, On Writing (2000).