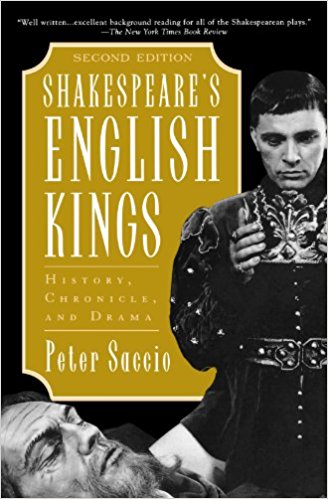 One of the biggest problems with being on holiday with non-reading friends is that you become embarrassed by the amount of time you want, no NEED, to spend in bookshops.

So this was a book I could easily have missed whilst browsing a second-hand bookshop in Leominster.  I was really lucky to have my other half on hand to find it out for me, because time was running out, and I was beginning to worry about the patience of the friends we were holidaying with, who had already politely wandered round the shop and were now at the ‘waiting outside for you‘ stage ….

This book, as I’ve alluded to in the entry in the Boar’s Head Bookshelf, is brilliant.  Concise, well-researched and objective, and I’d recommend it to anyone wanting to get stuck into the history plays – especially, perhaps the HVI trilogy, as it really helps with an understanding of the historical context.

The book’s heavily flagged, and it’s hard to pick a single passage, so I went for a reminder of what we’re looking at when we study the plays:

A play was not a fixed thing:  it was a fluid, evolving event that took place many times on Elizabethan stages.  Contributions to that event were made by a writer who sometimes changed his mind, by actors who had ideas and impulses of their own, by travelling players who altered the script as they toured different venues, and by compositors who set into type handwritten manuscripts of various degrees of legibility.