Be careful what you wish for, Bolingbroke … 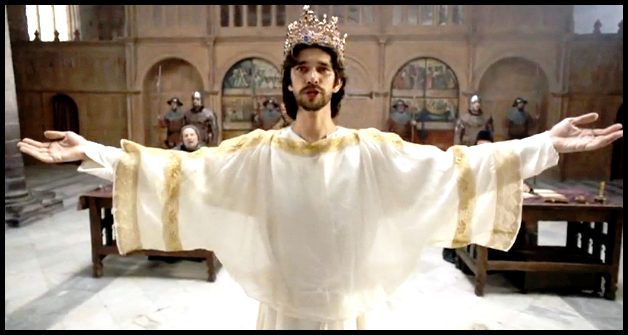 Why’s it taken me so long to get this one written? To get this play finished?  To ‘officially’ say goodbye to Richard II for a few years, given I have no opportunity to teach it at either GCSE or A Level?  That question probably contains its own answer.

Or, the fact that it’s Romeo and Juliet next …

You know – if you’ve been reading along – how deeply I feel an affinity for Richard’s journey.  Perhaps when I (eventually) get to the end of the PTS I’ll reflect that the ‘most important things are the hardest things to say‘, as Stephen King tells us [a].  It’ll be interesting to look back and see whether the plays I found harder to connect with came and went rather quicker.

Why so emotional, when Richard was never more than prissy, petty, but admittedly good with words, at the beginning of the play?  ‘Because Shakespeare’, as my friend Claire might (but probably wouldn’t) say … Perhaps Michael Bogdanov might join us at the bar and contribute in his inimitable style:

By the conclusion, Shakespeare has achieved something of a miracle in completely turning the tables on our feelings for Richard.  He transforms him from a distasteful, selfish waster into someone for whom we have heartfelt sympathy.  […] by the side of machiavellian Bolingbroke, Richard now looks positively angelic: the paradox of many of Shakespeare’s falling tyrants is that they have a great deal more poetry in their souls than their conquerors:  compare Macbeth and Malcolm.  This aching gap between the pragmatism need to rule and the power of the imagination to transcend earthly concerns is one which preoccupied Shakespeare, constantly baffling him.  Man’s inability to combine passion, poetry and humanity with the daily grind of taxation, unemployment, homelessness’ [b]

It’s uncomfortable, for reasons I can’t quite articulate, to ignore Richard’s queen, Isabella.  Perhaps because she’s ripped away from Richard, but maybe also because in scene i she challenges him, almost ‘Margaret-of-Anjou’ style, with several indignant questions.  ‘Man up!‘, I hear her saying, and I wish I could spend more time on her.  But, anticipating especially Portia and Calpurnia in Julius Caesar, my self-imposed and often overstretched word-count doesn’t really permit lingering on the stories of some of Shakespeare’s wives.  Maybe that’s a cue for a post of its own?

The pathos continues only a little into scene ii, but it is powerful:

DUCHESS OF YORK:  Alack , poor Richard!  Where rode the the whilst?

EDMUND OF LANGLEY:  As in a theatre, the eyes of men,

After a well-graced actor leaves the stage,

Are idly bent on him that enters next,

Thinking his prattle to be tedious  [c]

Richard was THE star – now he’s supporting cast, at best.

Comfort yourselves, ye who weep for our deposéd king.  Scene iii is absurdly comic in showing how Henry IV (I suppose it we should call him that now), won’t get it all his own way.   This, incidentally, is the only time in the play when the elaborate metre and rhyme scheme strikes me as artifical and ludicrous – coincidence?  The Duchess of York reduces what ought to be a compelling family drama, and a serious rift between a married couple to something that irritates not just me, but Henry too!

DUCHESS OF YORK:  I never long’d to hear a word till now;
Say ‘pardon,’ king; let pity teach thee how:
The word is short, but not so short as sweet;
No word like ‘pardon’ for kings’ mouths so meet. (V.iii)

At the time of writing, I had been teaching the Scrivener’s scene in Richard III (III.vi), and we discussed the idea that Shakespeare had taken the time out to write this, because it was important.  Act V scene iv is similarly brief.  I think it closer, in many ways to Richard III’s wonderful exchange with Buckingham about the fate of the young princes.  It’s all about ‘plausible deniability’, right?

‘Have I no friend will rid me of this living fear?’ (V.iv)

You bastard, Henry – Exton’s more ambitious, less principled than Buckingham was.  And you have taken full advantage.  NO amount of regret, after the event, will atone.  I WILL crucify you at the beginning of 1 Henry IV:  ‘Crusades my arse’, as Jim Royle might say:

I don’t always agree with Germaine Greer, but she nails the final two scenes here:

we glimpse the ironic possibility that loss of kingship may ennoble Richard while gaining it destroys Bolingbroke’s integrity.  […] He dies heroically, whilst the erstwhile hero of the play is reduced to equivocation and cowardice by the demands of policy. [d]

Richard’s death, and the anagnoristic speech that precedes it, moves me every single time:

I wasted time, and now doth time waste me (V.v)

will be familiar to all my students, regardless of age: it’s the quintessential carpe diem; a frequent feature on my ‘Shakespeare says:’ noticeboard (especially in the run-up to exams); a personal motto and long-standing contender for my next tattoo …

has brought tears to my eyes more than once.

A bit like the act itself, this post’s been bitty, and perhaps a bit unstructured.  I’ve managed to save some room, in my word-count, for the final scene.

In amongst the reports of the inevitable putsch of opponents, I suppose I ought to give Henry IV credit for sparing the bishop of Carlisle.  My biased view, though, is that he is squeamish.  Henry seems happy at the reported deaths (including another churchman, the Abbot of Westminster) but balks at Carlisle?  And as for Northumberland, Hotspur and the other people who’ve put Henry on the throne?  I’ll remind you of what Machiavelli says your reward should be, when we finally hit 1 Henry IV …

We finish, in some ways foreshadowing Hostpur’s fate, with Henry cheekily pronouncing the mark of Cain on Exton.  Not content with usurping Richard, now he wants to usurp God?  Can you tell how much I hate him?  Henry – the ultimate politician – finishes with an aspiration which may settle any dissent, but I doubt he ever intends to make this penitant journey.

I’ll make a voyage to the Holy Land,
To wash this blood off from my guilty hand (V.vi)

I’ll finish with two quotations – the first from the man he’s just had assassinated:

‘Not all the water in the rough rude sea

Can wash the balm from an anointed king’ (III.ii)

Will all great Neptune’s ocean wash this blood
Clean from my hand? No, this my hand will rather
The multitudinous seas in incarnadine,
Making the green one red.  (Macbeth II,ii) [e]

And leave you with the idea that Shakespeare makes us mourn the death of an ineffective king, and despise the ‘king of smiles‘ (1HIV, I.iii) who replaces him …