When you teach Richard III you almost inevitably touch on the idea that ‘history is written by the winners’, as Orwell said in 1944 (and again, of course, so horrifically in Nineteen Eighty-Four). [a]

Who were victorious over Robert Devereux, second Earl of Essex in the end?  Would he have recognised the history they wrote for him? 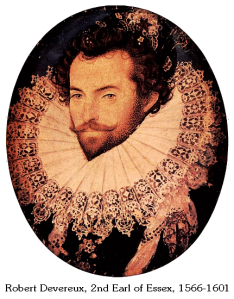 ‘What greater bliss can hap to Gaveston,

Than live and be the favourite of a king?’ [b]

Frankly, if this is what he looked like – and from this time distance it’s anyone’s guess – it’s no wonder that Devereux caught the eye of the ageing Elizabeth. He first caught mine when I studied Richard II, learning about his abortive insurrection in 1601 and how his supporters paid for a performance of a play (presumably Shakespeare’s) just before it kicked off – seemingly to put the people in mind of the possibilities of removing an unpopular monarch.  Richard had been a touchy subject with Elizabeth for some time anyway, and the performance history of Shakespeare’s play features periods when the deposition scene (uncannily similar to that of Edward II in Marlowe‘s history play) was cut.  It’s also quite well known that Shakespeare makes a rare reference to contemporary events in Henry V, equating Henry’s welcome after Agincourt with what Essex could expect should he triumph in Ireland:

How London doth pour out her citizens!
The mayor and all his brethren in best sort,
Like to the senators of the antique Rome,
With the plebeians swarming at their heels,
Go forth and fetch their conquering Caesar in:
As, by a lower but loving likelihood,
Were now the general of our gracious empress,
As in good time he may, from Ireland coming,
Bringing rebellion broached on his sword,
How many would the peaceful city quit,
To welcome him! [c]

Quite remarkable.  And surely suggestive of Essex being perceived as far more than the bungler he’s so often made out to be. 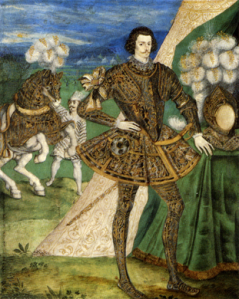 My interest was rekindled a while later when I bought Lytton Strachey‘s book.  The death of chivalry was on my mind as I read through the Henry VI plays, and whilst Strachey does play to the picture of Essex as hapless and misguided, he was, perhaps, a man out of his time?

‘the spirit of the ancient feudalism was not quite exhausted.  Once more, before the reign [Elizabeth’s] was over, it flamed up, embodied in a single individual – Robert Devereux, Earl of Essex.  The flame was glorious – radiant with the colours of antique knighthood and the flashing gallantries of the past; but no substance fed it; flaring wildly, it tossed to and fro in the wind; it was suddenly put out.  In the history of Essex, so perplexed in its issues, so desperate in its perturbations, so dreadful in its conclusion, the spectral agony of an abolished world is discernible through the tragic lineaments of a personal disaster.’ [d]

I’m not convinced that antique knighthood was a survival strategy at Elizabeth’s court.  And whilst there may have been rampant displays of flashing gallantries, I reckon that’s all they were: displays.  Not much room for someone who actually walked the walk, probably.

And so, eventually, this brings me to this week’s quotation, taken from near the promising beginning of Clare Asquith‘s book.  Perhaps Essex was indeed – at least politically – a lamb amongst wolves: wolves who fell on him as soon as he could no longer rely on Elizabeth’s protection.  Wolves who rewrote Essex’s history once they had consumed him:

“Powerful figures in the Privy Council ensured that the reasons for Essex’s immense popularity in the last decade of Elizabeth’s reign were comprehensively erased and forgotten. Instead they laid the groundwork for his later portrayal as an unstable lightweight who owed his advancement to the queen’s attachment to him, overreached himself, and became the naïve victim of factional infighting at court. Accounts of the more disreputable episodes in his life were widely circulated at the time, and they have been repeated ever since in countless histories, films, and novels—the moment, for instance, when Essex reached for his sword when the queen slapped him, or the infamous incident when, spattered with mud, he burst into the queen’s bedroom before she was dressed. Consistently overlooked are his military and political achievements, his charm of character, his personal code of honour, his huge popularity at court and in the country. Essex has been presented to us as an emotional and irresponsible court favourite whose intemperate actions were outmanoevred, happily for the country, by wiser and steadier counsellors close to the queen.” [e]